After a number of years without having a “real” vacation, I splurged and took my sweetheart of nearly 30 years to New York City. We definitely did the tourist gig and went to many of the must-see city icons: 9-11 Memorial, Grand Central Station, Empire State Building, Metropolitan Museum of Art, Central Park, and Times Square. Of course we also visited China Town and had lunch in neighboring Little Italy. The MTA Subway provided our transportation, but a looming union strike made it a bit worrisome. By the end of the trip, all was well. Our digs for the week was the Grand Hyatt, which sits between Grand Central Station and the Chrysler Building. It was great being in the heart of the city!

Since this trip did not include several photo students as in the past, I chose not to carry my large professional camera gear. Instead, I opted for a small, light-weight digital rangefinder-style camera from Fujifilm….it was a silver and black X20. Very 1960s retro look! It took great shots (all those in this blog post) and looked so stylish for my tourist modus operandi.

For those of you who know my food photography, I apologize for not capturing the incredible seafood and lobster paella I had at my favorite Spanish tapas bar in Greenwich Village. I was too excited to dive in to the food to worry about photographs! Sorry! 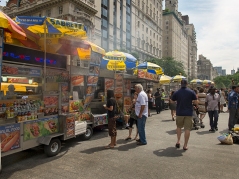 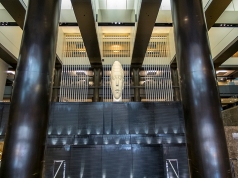 Lobby of the Grand Hyatt, which served as our base of operations while in NYC.

Eternal reflections at the 9-11 Memorial in lower Manhattan, New York. 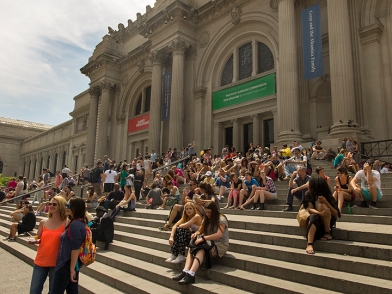 Looking towards lower Manhattan with the Flatiron Building in center foreground, new World Trade Center in center background (purple tower) and the Brooklyn Bridge on the horizon.

Other sights along Times Square!

Super Heros roaming Times Square…of course they all are broke and want your dollars for their photo.