After a few days of cabin fever brought on by a major snowstorm and several inches of the white stuff, Wilson and I headed north to the Confederate Memorial State Historic Site, just outside of Higginsville, Missouri. The evening was perfect for tracking down those elusive light orbs and we wondered how they would appear against and snowy backdrop under a full moon.

Crisp temperatures at 27oF (-2.7oC) and deep snow provided the perfect cooler for a couple of brewskies. Simply insert beer bottle into deep snow, wait about 15 minutes and enjoy a truly ice-cold refreshing beverage!

Hmm…sorry for getting side-tracked. Back to our scientific and creative endeavors! We did discover that EL Wire (aka electro-luminescent wire) did not function properly at these colder temperatures. Also, those nice colored light orbs we encountered earlier in the season are extremely hard to detect under a full moon and reflective snow cover. The only orbs to significantly manifest themselves were the white ones, and that was still hard to record, being white against white.

So, after several attempts to capture the elusive winter snow orbs and listening to a cacophony of geese, we back up and headed in to Higginsville and enjoyed a nice Tex-Mex supper at the La Carreta cantina located on the main drag of old downtown. Excellent way to spend a few hours in the dead of winter!

Snow Orbs located in Confederate Park under a full moon in the snow. © Terry Ownby

So last night we broke our routine, instead of a Friday night photo shoot we did an impromptu trip to Pape Lake to watch the Geminid meteor shower, while photographing star trails.  With the temperature dipping to 34oF (1oC) and the lack of ambient moonlight (it was a New Moon), we could plainly see the immensity of the Milky Way, satellites, hundreds of aircraft moving along their flight paths.

On our eastern horizon we could easily see Pleiades or the Seven Sisters, Jupiter was in the midst of Taurus, and the star Capella was visible in the left of my viewfinder. Several meteors appeared, mostly coming from a northerly direction towards the south. One particular meteor put on a spectacular display as it incandesced blue-green with a huge orange tail that was trailing debris as it rocketed low across our northern horizon.

Below are two efforts from my evening’s night photography. First I targeted the eastern horizon from a portion of the dried lakeshore (due to the severe drought this past summer). The shoreline is clearly visible and serendipitously, Wilson wandered into the field between my camera and the wooded background to perform his light orb dance.

Eventually I changed to a southerly position next to Robert in order to show the reflections in Pape Lake and the glow of distant urban areas far in the background. I find it interesting how the manufactured glow of urban lights affects the white balance during digital shooting like this. I particularly enjoy the rich amber glow that gradates across the sky and its reflection into the still lake.  Although the wind was still, the duck and geese decoys anchored neared the shore gently moved during my long exposures, creating interesting ghost effects on the water’s surface. 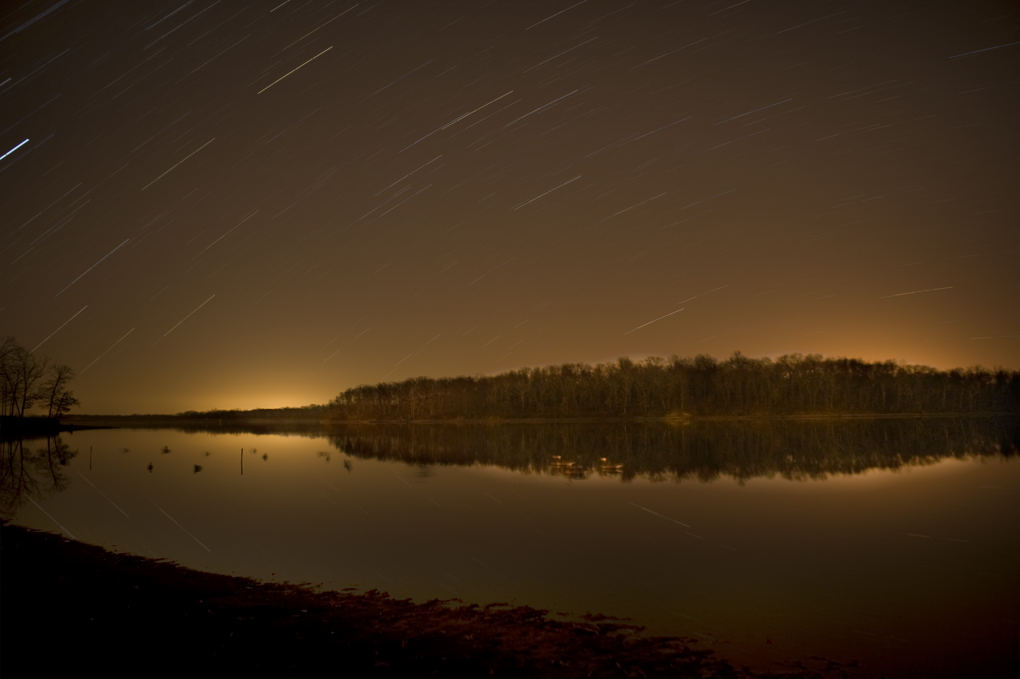 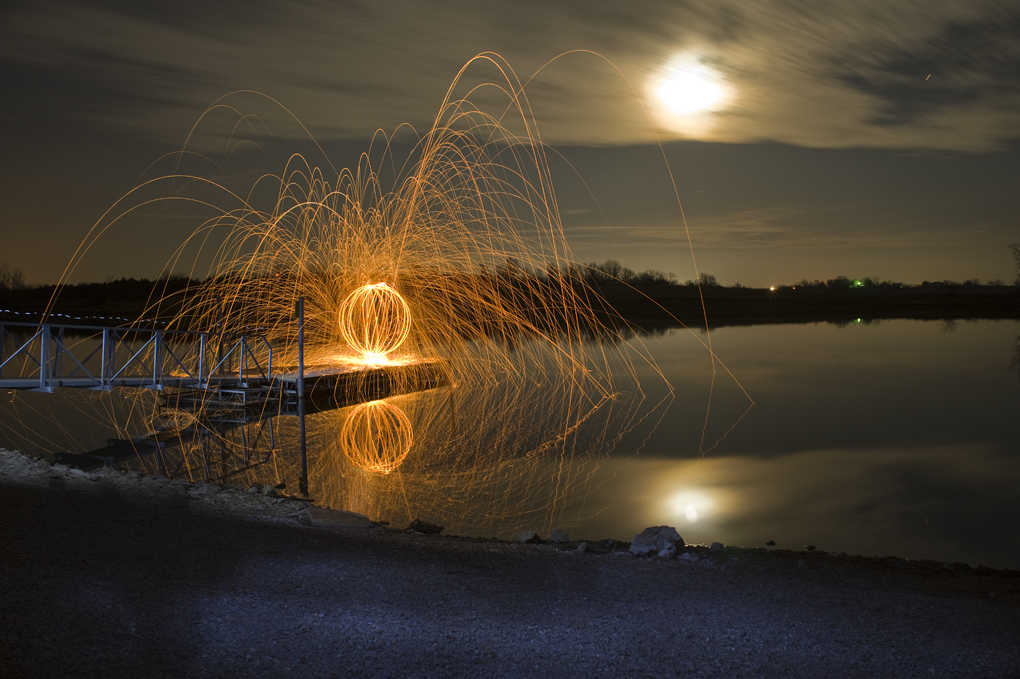 Nearly the end of another fall semester at the university, and the “three amigos”, aka “the three compadres” (Wilson, Tom, and myself), along with two other very good friends (Robert and Phil), headed off to a nearby lake on a recent Friday afternoon to enjoy a bit of global warming effects in early winter, some brewskis and sodas, and some evening performance art by Wilson and Phil.

Through the use of time-based digital still capture, we take light-energy performance art to an interesting level by incorporating the reflective quality of a still lake and the illumination of a full moon. Various forms of energy emitting devices are deployed during the performance, rendering images not typically encountered during a conventional photographic session of simply pressing the shutter release. Instead, through time-based digital still capture, levels of invisible or limited visible light energy are recorded, which often times reveal a rather surreal environment as we “break on through to the other side”—The Doors.

So this past Friday three die-hard photographers ventured out for a freezing night of photographing light orb phenomena at the Poague Wildlife Conservation Area, near Clinton, MO.  Although the temps dropped to 33oF (0.5oC), we had nearly a full moon to conduct our research into live performance art as captured with still-digital imaging technology. Wilson brought along several new light emitting devices, such as LED multi-colored light wands that changed colors and pulsated like strobes. Robert gave a great performance spinning burning steel wool, although during my performance the lanyard broke, sending a fiery trail off into the pond’s shoreline. Fortunately there were no uncontrolled fires!

Of course being this far removed from civilization, we were paid a visit by some local-yokels in their rattrap, exhaust leaking van, while they were spotlighting deer and other game in the woods. I think they were rather surprised to find a bunch of “old” guys in their haunt with tripod-mounted cameras and other paraphernalia. As they whispered to us (I suppose as to not frighten their illegal quarry) about our doings in their neck-of-the-woods, we simply replied that stars where our photographic subject. Once satisfied, they left and we resumed our light painting performance!

Despite the cold evening, the howling coyotes, and the curious kinfolk, we managed to stay warm throughout the performance and some of us enjoyed some ice-cold Guinness stout and Blue Moon winter spiced ale! 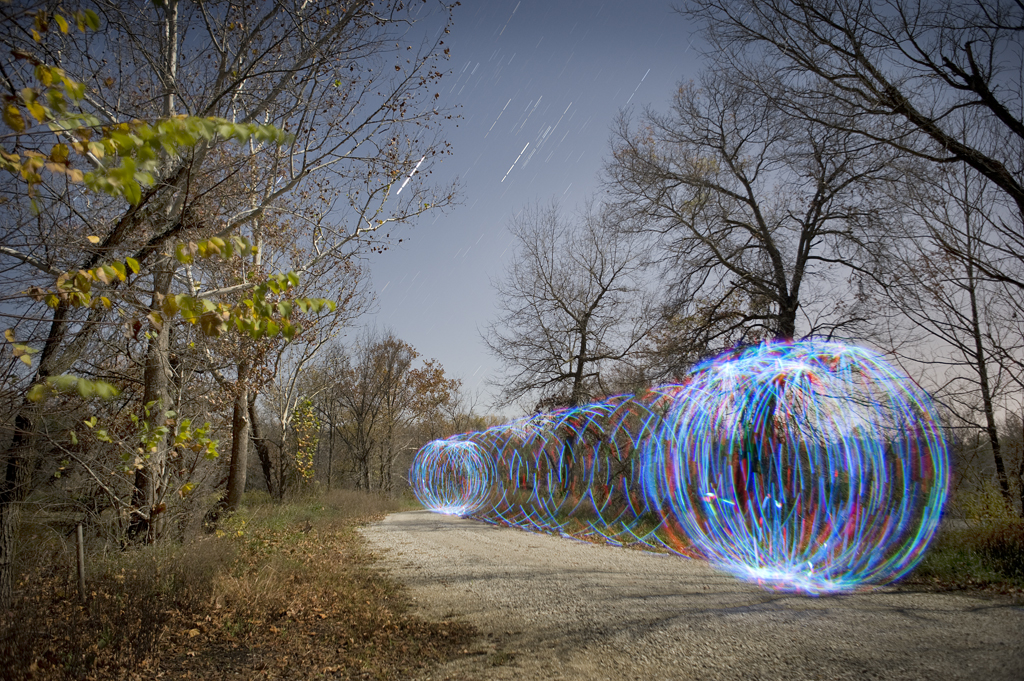