Yesterday Wilson and I traveled up to Grand Teton National Park for some interesting photography. Along the way we encountered mysterious rising steam off the Snake River in Idaho’s Swan Valley, before heading up over the Teton Pass. Once we dropped into the Jackson Hole area, the clouds completely filled the valley. At first we thought it might be a wasted trip, but we pressed on and went further north to Jackson Lake. Once at the lake, the cloud cover began breaking and resulted with an impressive layer suspended between the lake surface and the mountain peaks. Afterwards, we returned to the town of Jackson and had lunch at Cafe Genvieve, an eclectic little eatery just of the square. It’s been a busy week of photographing the region with my Missouri colleague!

75 years after Adams’ famous shot from this vantage point, erosion has taken its devastating effect on the famous Grand Teton mountains in western Wyoming.

After 75 years of severe erosion since Ansel Adams made his famous “The Tetons – Snake River (1942)” photograph, the majestic mountains have been leveled to nothing but a slight butte above the river. It’s amazing how quickly the landscape changes under these harsh Western conditions.

Recently, after months of planning with colleagues (Dr. Tom Mitchell and Mr. Robert Breshears) from the photography program at the University of Central Missouri, myself and Idaho State University student John Lowry rendezvoused with our counter-parts at the Badlands National Park in South Dakota. Our primary objective was astro-landscape photography, which involves daytime images of the landscape that transition into night versions with star movement. All total we had seven faculty and students from both institutions.

During the last few days of May, we watched temps at the Badlands soar into the upper 90s, with nights dropping into the 50s. The temperature swings made camping an interesting adventure. Besides typical camp life and cold showers, we made numerous trips throughout the Badland region for making traditional photographs (with a mix of vernacular snapshots) of ubiquitous bison and prairie dogs. One afternoon included a trip to the infamous Wall Drug, where snapshots were made of tourists riding the giant jackalope!

After three days in the Badlands, we broke camp and struck out for the Black Hills, with stops at Keystone and Mount Rushmore. I found Rushmore disturbing with its extensive commercialization and grand architecture…hmm a potential critical theory paper in the making! Nothing like I experienced back in the 1970s and 1960s. Everything changes with time.

The last stop on our photo road trip was Devils Tower, Wyoming. Here I managed to craft an excellent astro-landscape photograph, which transitions from daylight into night with star trails above the Tower. The following day my Missouri compatriots departed to return to the Midwest, while John and I pushed westward. Photo opportunities presented themselves throughout Wyoming, including detailed shooting at the Heart Mountain Relocation Center (Japanese concentration camp) and Yellowstone/Grand Teton National Parks. 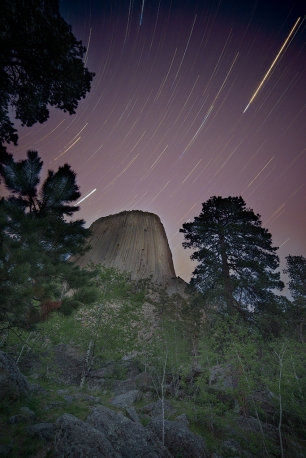 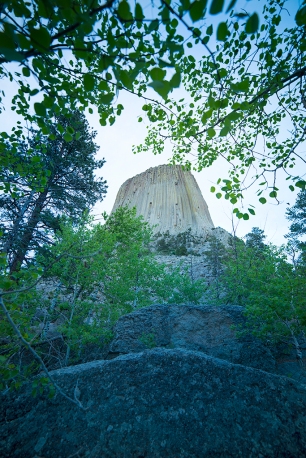 Megan gets a hug from a giant prairie dog in South Dakota! © Terry Ownby

John (ISU) and Tom (UCM) waiting for the stars to come out in the Badlands. © Terry Ownby 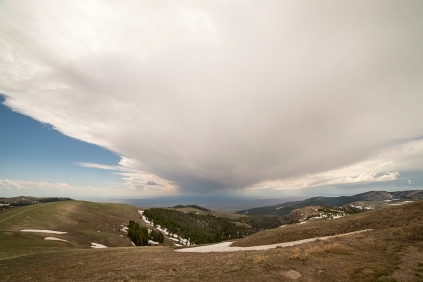